Amy Giddon became a corporate refugee after being moved by a participatory art installation in New York city’s bustling Union station. Picture an enormous wall, covered with thousands of sticky notes, each one featuring an anonymous message, penned by everyday passersby.

More than once, enraptured by the wall of notes, Amy lost track of time – despite being in one of the most frenetic places on earth. When she finally peeled herself away, she would feel uplifted – each and every time. And based on the friendly nods and warm smiles of strangers, it was clear she wasn’t alone. Why was that, she wondered, and could that sense of connection be recreated online?

Introducing Daily Haloha. Launched by Amy in 2019 to tackle loneliness, foster empathy and improve wellbeing, the app asks a single thought-provoking question to the whole world every day. Subscribers can answer the daily prompt without fear of judgment and scan the Haloha Wall to see what everyone else has written.

Amy sees the app as an antidote to the toxic sludge of social media. Instead of comparison and conflict, it encourages curiosity and compassion. “Everyone’s welcome and everyone matters equally. There are no influencers. No one’s contribution stands out in greater magnitude than anyone else’s,” she says.

I didn’t know much about participatory art before my Purposeful Empathy interview with Amy. But after our delightful conversation (Episode 1 of Season 2), I fell down a fascinating rabbit’s hole. According to Wikipedia: “Participatory art is an approach to making art which engages public participation in the creative process, letting them become co-authors, editors, and observers of the work. This type of art is incomplete without viewers’ physical interaction. It intends to challenge the dominant form of making art in the West, in which a small class of professional artists make the art while the public takes on the role of passive observer or consumer, i.e., buying the work of the professionals in the marketplace.”

No wonder I love it.

Daily Haloha adapted Levee’s participatory art installation to an online platform and uses technology to amplify our capacity for kindness and desire to feel a sense of belonging. Meanwhile, Levee has joined Land & Story, “a small, committed group of artists, activists, and change-makers traveling across the US to bring people together in a divided time.”

Other participatory initiatives that speak to me include:

Empathy Walk
In this activity, people are assigned roles or characters for a group walk. As the group moves around a neighbourhood, participants are prompted to think about the mobility constraints their character is facing. Their website states: “Different people have differing experiences of mobility and safety as they travel through their neighbourhoods. Understanding these different experiences can build equity and empathy. It can also help identify accessibility concerns and infrastructure gaps.”

A Monument for the Anxious and Hopeful
This exhibit “examines our emotional relationship with the future by inviting visitors to anonymously write their anxieties and hopes on vellum cards and display them on a 30’ x 15’ wall for others to see. Installed for the duration of 2018, the wall grew into a monolithic barometer of the year’s emotional weather: Vivid fears in the wake of each mass shooting. Glimmers of empowerment as the Me Too movement gathered steam. Agitation and excitement in the midst of election season. And universal concerns about love, purpose, relationships, addiction, debt, and distraction, as well as inspiring reflections on compassion, family, resilience, and embracing change. By the end of the exhibit, over 50,000 individual meditations were displayed on this public wall, ranging from deeply personal reflections to broader political, spiritual, and psychosocial statements.”

The Artist is Present
Finally, by researching participatory art, I was reminded of Marina Abramović’s spell-binding performance at MoMA in 2010. “Seated silently at a wooden table across from an empty chair, she waited as people took turns sitting in the chair and locking eyes with her. Over the course of nearly three months, for eight hours a day, she met the gaze of 1,000 strangers, many of whom were moved to tears.” If you haven’t seen the 3-minute YouTube video about the show that went viral (18 million+ views), stop what you’re doing. In it, she comes face-to-face with Ulay, her ex-lover and former artistic partner with whom she hadn’t spoken for several years after a bitter break-up. I dare you to watch it and not be moved to tears.

Then, I invite you to download Daily Haloha from the App Store or Google Play store. According to the Center for Compassionate Leadership, the app “inspires you to think more deeply each day about a simple, but profound topic; and helps you feel more connected to your fellow humans around the world.”

It’s still January and not too late to find a New Year’s resolution that’ll stick. How about exercising (more) empathy with Daily Haloha? On that note (no pun intended), I wish you, dear reader, a joyous, healthy and peaceful 2021.

Check out the Season 2 premiere of Purposeful Empathy to catch the full conversation with Amy Giddon. 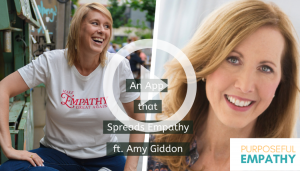 Watch all episodes of Purpose Empathy on YouTube or listen to them as podcasts brought to you proudly by Grand Heron International.